The last week and a bit I have been away on a family holiday. I have had a wonderful time with my folks however my vegan diet has been limiting on where and what I could eat. I have to say that I did find a few places offering vegan meals and a couple of great vegan cafes!

First up is The Retreat in Grassington. A great vegetarian cafe with a good selection of vegan meals, snacks and the best sticky toffee pudding I have tasted in a long time! The owner is a vegan himself which is always a good thing in my book, as they make things with a vegan palate in mind. I think to make a dish vegan is the easy part, to make it taste great I feel you need to at least be a veggie! As your taste buds really change when you cut out the meat and dairy! The owners also have a back ground with animal rights and have volunteered at a animal sanctuary for many years too, so really believe and practice what they preach. The food was reasonably priced, and it had a warm and friendly atmosphere! We had the home made Brazil nut pie which was flavourful and very filling. Find out more info at http://www.theretreatcafe.co.uk/ 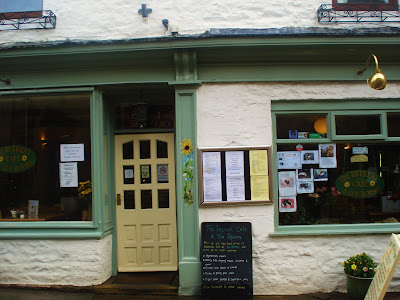 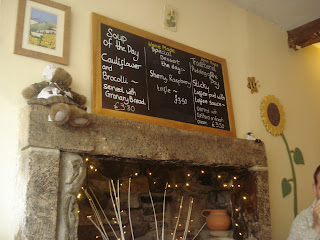 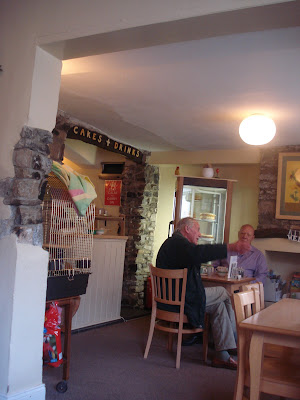 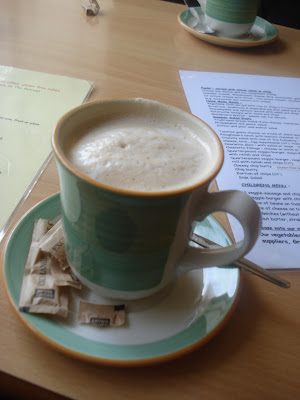 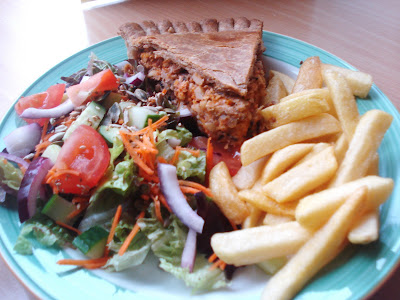 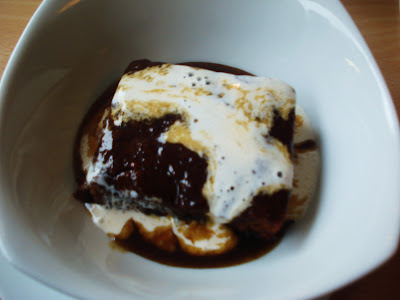 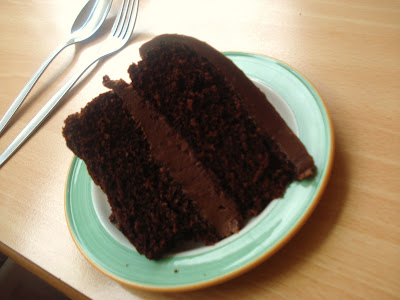 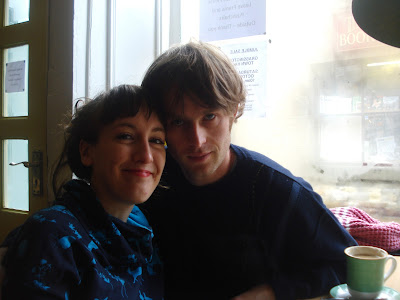 Next we went to The Veggie Cafe in Ilkley. It was easy to find on the main street running through Ilkley and it was a warm welcome from the rain and strong winds that had hit Yorkshire! Again there was a good selection of vegan dishes, I was in the mood for a chickpea and lentil burger and spicy potato wedges. It was beautifully presented and was yummy, perhaps a little more seasoning in the burger as it was slightly bland but the hummus was delicious and the salad had baby beet leaves? and coriander stems which was lovely. My mum had the soup which was spiced sweet potato and lentil and she said it was delicious. We then had a wonderful piece of chocolate orange cake which was moist and was just what I needed and turned out to be the only piece of chocolate cake I had on the holiday!!! It was a little more expensive but it is an organic cafe and I don't mind spending a little more on organic produce and it was definitely worth it. Find out more at http://www.theveggiecafe.co.uk/ 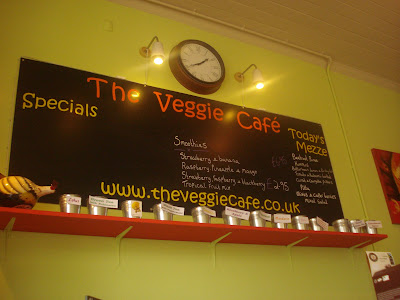 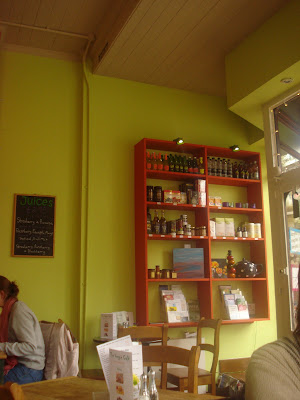 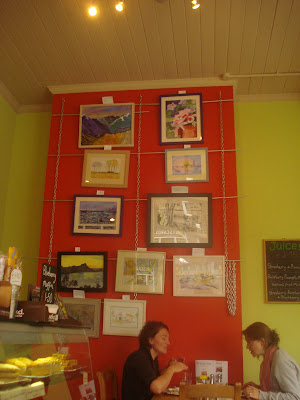 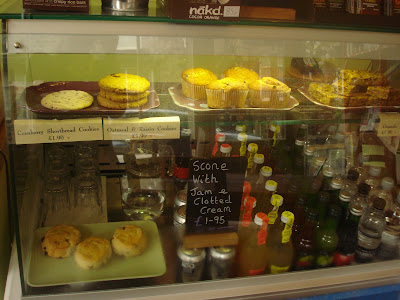 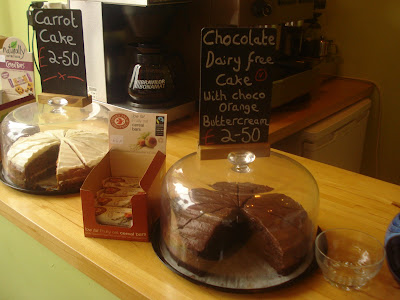 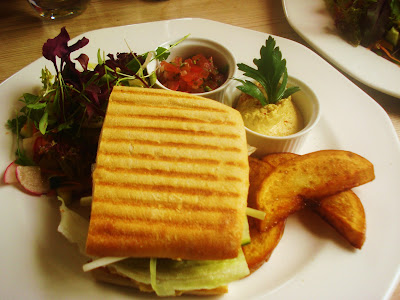 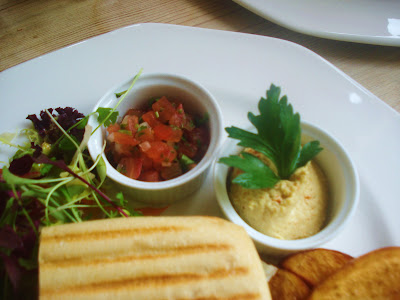 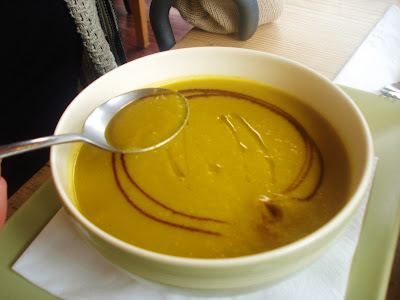 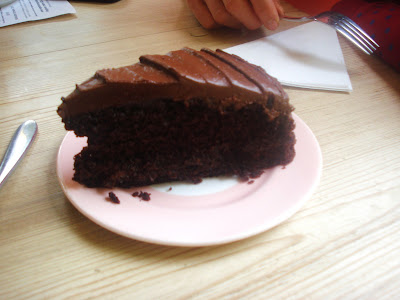 A mention has to go to Chaste at Hawes which has a good selection of vegetarian meals. It does have meat and dairy on it's menu, but made a special effort to make us a vegan lunch and it is all locally sourced. 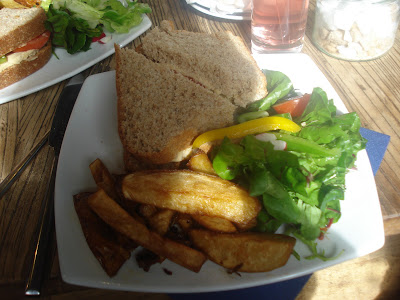 We also found two vegan meals at The Old Granary Tea Shop at Pateley Bridge! I had a vegetable chili jacket potato and Kyle had the Moroccan vegetable stew. It was all fresh vegetable and pulses, no soya TVP in sight and it was actually really tasty and they do great gluten free options too!

A lot of these restaurants and cafes were a car drive away, and as we were staying in a cottage in the middle of  nowhere, there was a lot of cooking in the cottage! (Not that Kyle minded) 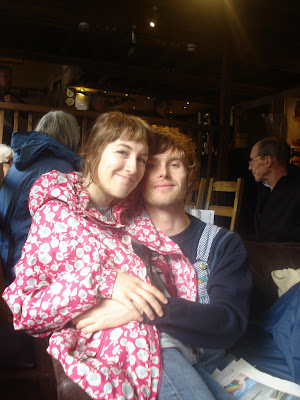 Posted by Deerly Beloved Bakery at 18:48