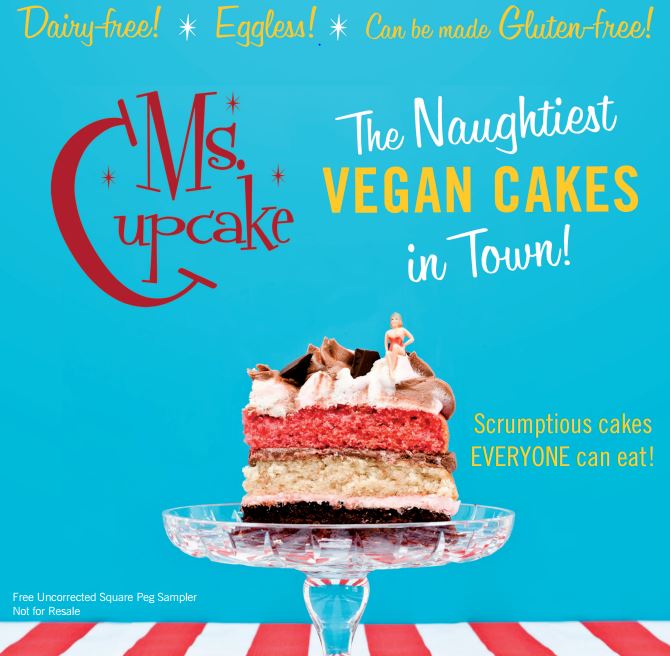 A month or so ago I was asked if I would review Ms Cupcakes new Cookery Book and I jumped at the chance! A few weeks later a parcel arrived for me, containing this beautiful shiny book and I was super excited! 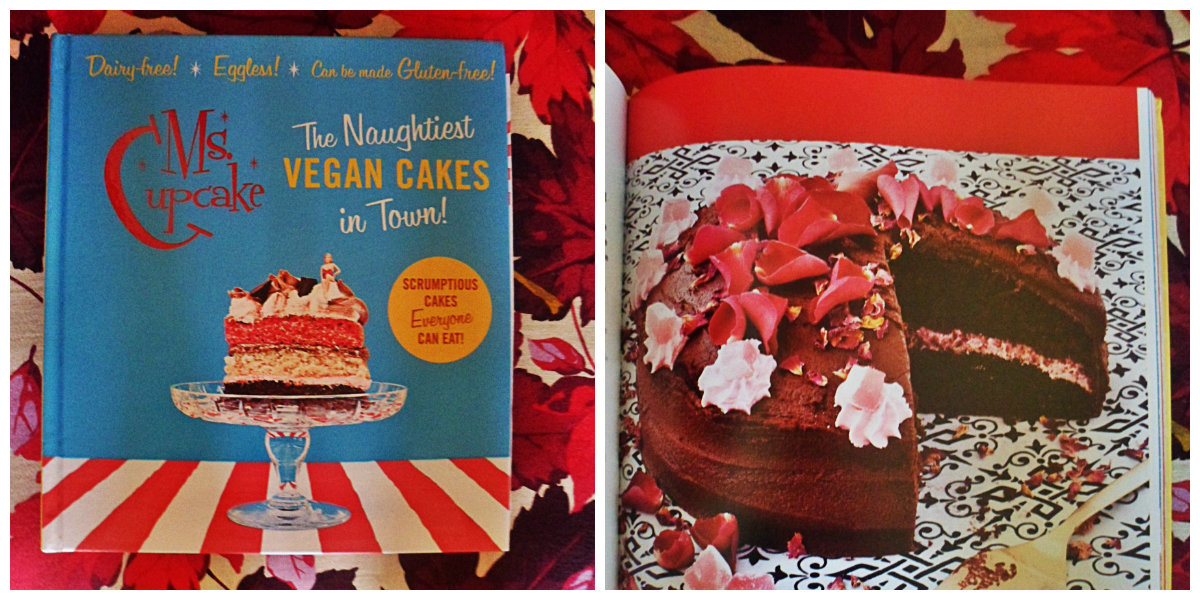 Personally I always am drawn to cookery books that have lots of pictures and this book does not disappoint! There are gorgeous quirky pictures on every page that grab your attention and feel like they have truly captured the Ms Cupcake vibe of retro cool indulgent treats! From the Rhubarb and Custard Cake to Apple Fritters, there is something for every skill level and lots of handy tips along the way!
Of course there is a whole chapter on what everyone knows Ms Cupcake for....Cupcakes! Bakewell Tart Cupcakes and Coconut Bounty Cupcakes especially caught my eye, Yum! 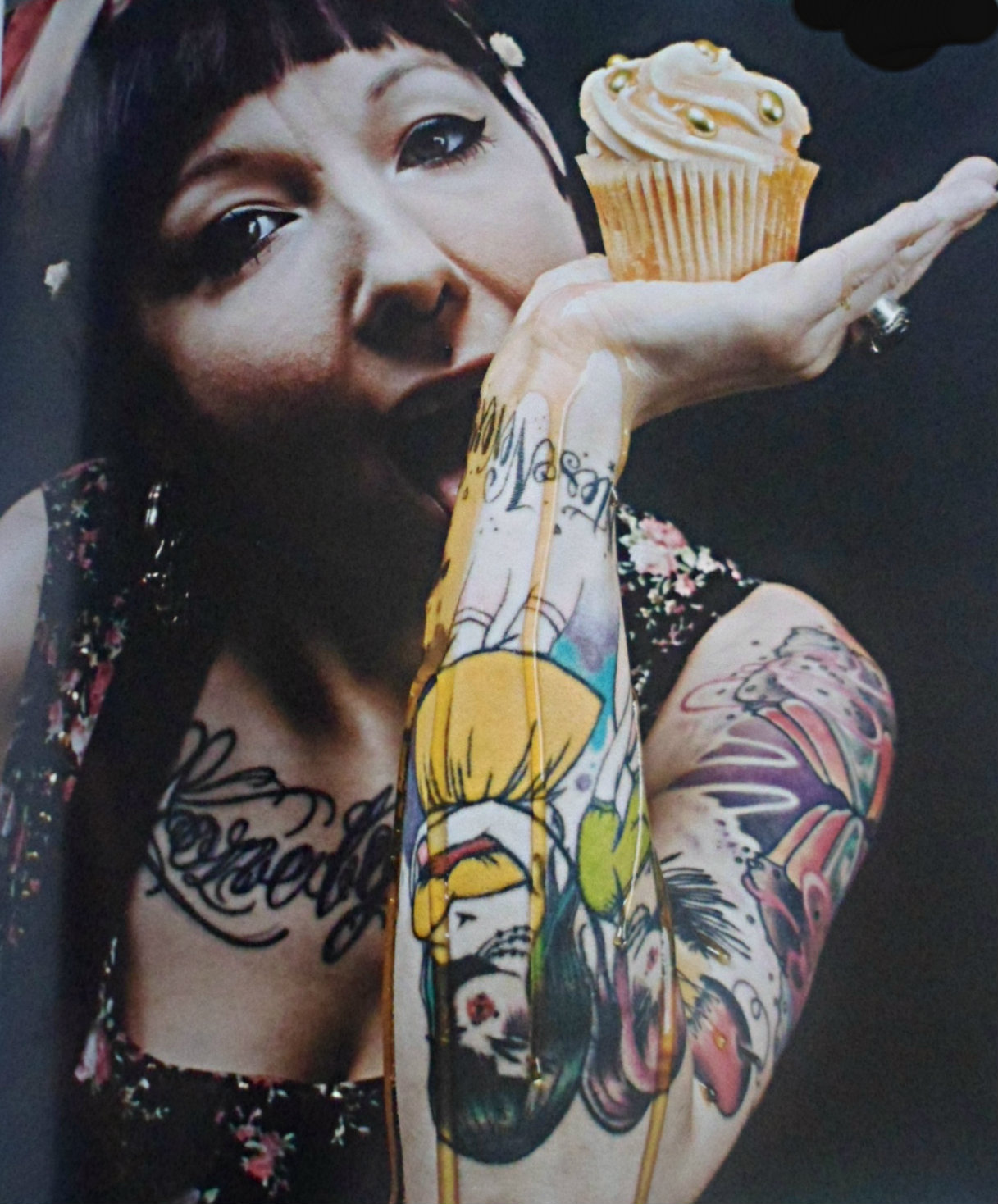 There are chapters on icings and spreads, easy-bakes and no-bakes, and cookies to name a few. As well as a section called Quick Start Guide which is very helpful to new and old vegan bakers, full of ingredient alternatives and tips to get the best results. The ingredients used in the recipes are kitchen cupboard staples too, so no hunting around at the local health food store trying to find a non-pronounceable mystery ingredient! 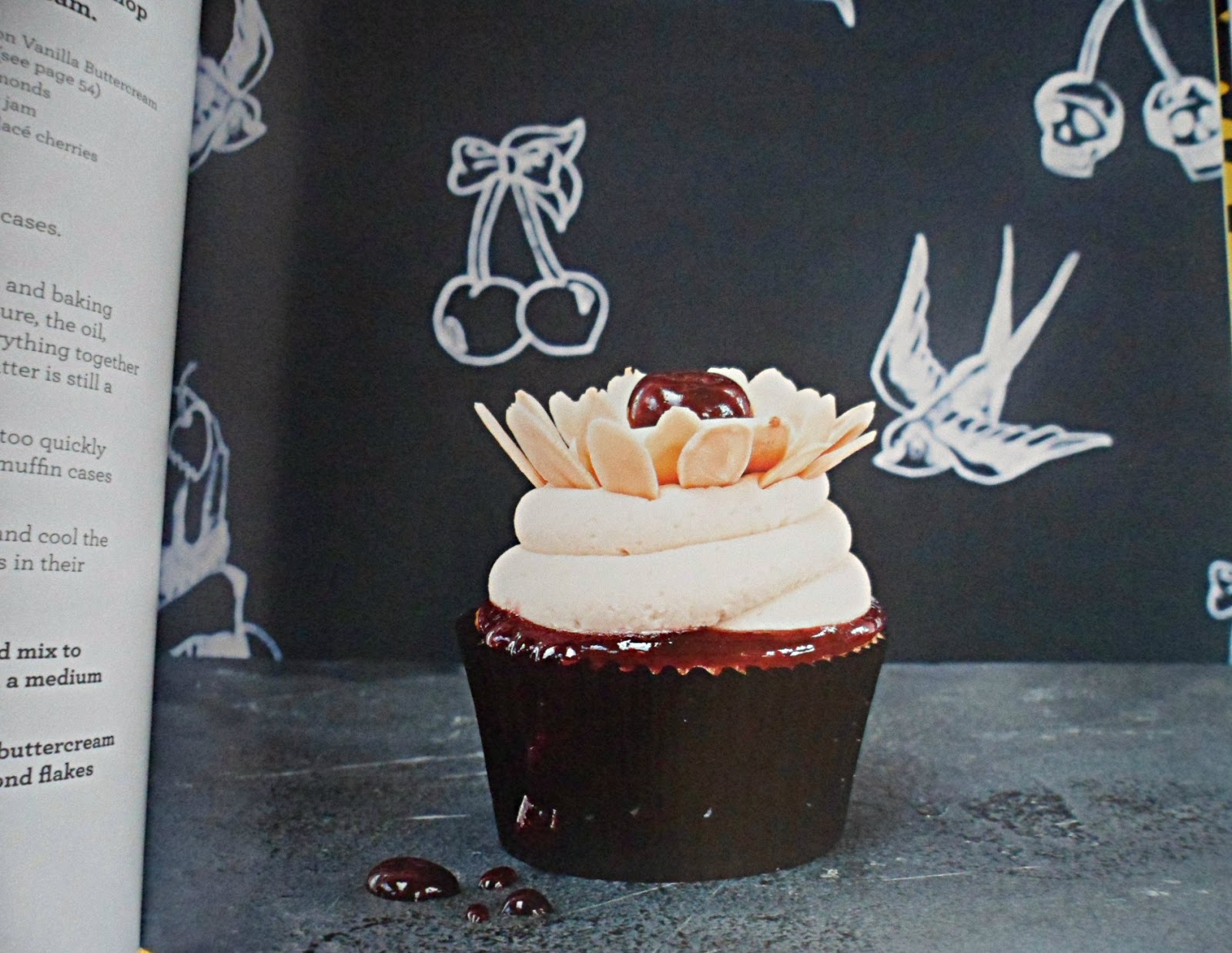 This is a great vegan cook book to add to your collection and I would really recommend it! It is available from the 9th of May priced at £16.99.
Right I am off to make some Ms Cupcakes cupcakes, bye!!!

Ms Cupcake was kind enough to do a mini interview too!

DBB: Hey Ms Cupcake! Well done on the publication of your first recipe book! It is so beautiful and has an amazing array of recipes! What are your favourite recipes to make from the book?

MsC: Gosh!  I hate playing favourites when it comes to my recipes!  They are all my babies – how can I pick a favourite?? However, I do have a soft spot for our Bakewell Tart cupcake.  This was one of the first cupcake flavours I created many moons ago and it’s still one of my favs!  I also love the whole of the section ‘Naughtiest of them all’ where we have recipes for Deep Fried Cookie Dough, Easy Fried Pie and Dessert Sandwiches.  The recipes are all a bit ‘dirty’ (in a good way!) which is what I like!

DBB: What recipe would you suggest for someone new to vegan baking?

My Victoria Sponge Cake is ridiculously easy, but some people are scared off by the decorating bit – so I recommend trying something like our peanut butter Snap Bars which don’t even need to be baked!  They’re super simple!  The Jaffa cakes recipe is also causing a bit of a stir with people and it’s a super-easy one too!

DBB: What was the first ever cupcake flavour you came up with?

MsC: I started off with 7 flavours.  It’s funny to look at those flavours now because some of them are still best sellers and some of those recipes stay in the back of the recipe box now! I started off by naming them with cute and (sometimes) ‘ironic’ names – which we eventually phased out because we had to constantly explain to our customers what the flavours actually were:  The original ones were:

Lovely Lyle – now called the Golden Syrup.  Still a favourite – the recipe is in the cookbook!
School Fete – we don’t do this one anymore but do a similar version called the ‘Sweetie Pie’ now.  Basically it is a vanilla cake with loads of sweets on it – a child’s dream cupcake.
Bakewell Tart – this one also made it into the cookbook.
Lemon Drop – this is our cupcake version of a lemon drizzle cake. It still tingling the taste-buds of customers today!
Birmingham Bliss – This was an ode to the chocolate company based in the Bourneville area of Birmingham.  They used to make chocolate chunks for baking that were dairy free, but they stopped making them a while back – so we stopped making these!  We now have our Triple Chocolate cupcake in its place.
Kendal Mint Cake – This was a rich and dark chocolate mint cupcake which we don’t make very often nowadays. But we’ve replaced it with the very popular Chocolate Chip Mint – which is in the book too!
Death By Jaffa – Jaffa cake inspired cupcake which still reigns as one of our top sellers at the bakery.

DBB: For a first time customer to your bakery what treats shouldn't they leave without trying?!

MsC: Our cupcake called the Ambassador is by far our bestselling treat. It is inspired by the chocolate ‘Fererro Rocher’ and is a hazelnut and chocolate mound of pure joy!  Second up I’d recommend one our cookie sandwiches which is two American style cookies sandwiched together with lashings of buttercream – yummy!

DBB: Tell us about a meal or dessert that evokes a special memory for you and why!

MsC: I remember when I picked up that book ‘Vegan Cupcakes Take Over the World’ by Isa Chandra Moskowitz and Terry Hope many years ago and baked their vanilla agave cupcakes – it blew my mind open because at the time I was an Ovo-Vegetarian (I’d cut out dairy but not eggs yet) and couldn’t believe you could make awesome vegan baked goods.  It was a massive turning point for me because I ran out of excuses as to why I wasn’t vegan yet.  Baking those cupcakes changed my destiny.

DBB: What are three ingredients you couldn't live without?

MsC: Sugar - I know it’s horrible and I’d be a heck of a lot slimmer without it – but golly-gee do I have a sweet tooth!
Peanut Butter - I would honestly put peanut butter in EVERYTHING I baked if I could get away with it!
Maple Syrup – what can I say?  I’m from Canada originally – I have it coursing through my veins!

Posted by Deerly Beloved Bakery at 07:50