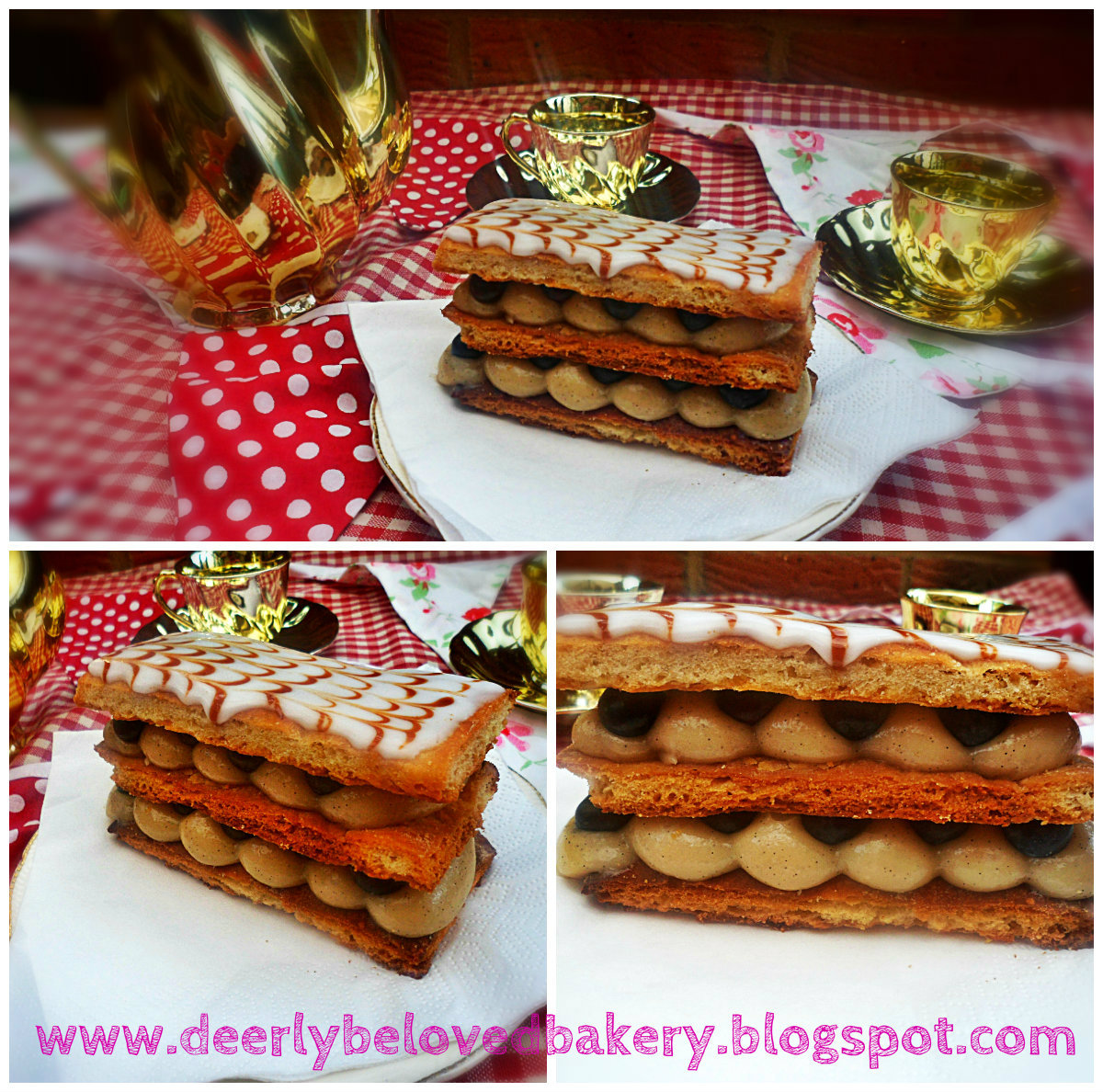 I have always wanted to have a go at making a Mille-Feuille and dream that I am working in a french bakery! And well it kinda came true in that I made a super yummy Mille-Feuille! The hardest and most time consuming part of this bake is the puff pastry (it takes several hours to make and then has to be left to prove over night.) Although of course you can always buy some ready made!

To Decorate:
1 Punnet of Blueberries
1 Cup of Icing Sugar
2 Tbsp of Soya Milk
1 Tbsp of Suma Pear and Apple Spread

In a bowl add the yeast, water, soya milk and sugar. Allow the yeast to activate for 5 mins. Then add the flour and mix until combined. Flour your work surface and knead the dough for 5 mins. Then roll out the dough into a large rectangle add the cup of margarine to the middle of the dough and spread it thickly so it covers the middle third of your dough. Fold each side of the dough over the margarine, so there is one layer of dough on the bottom, a layer of margarine, then two layers of dough. Wrap the dough in cling film and chill in the fridge for an hour.
Flour the surface again and roll out your chilled dough into a rectangle. Fold again in the same way as before, folding the two long slides into the middle. Chill again for another hour and repeat this process a further 2 times before cling wrapping and leaving to rest in the fridge over night.
Roll out your pastry on a floured surface and cut into 12, 5'' X 2.5'' even rectangles (3 per Mille-Feuille) place on some baking paper and cook for 15-20 mins until golden brown and puffed up! Once cooked remove from the oven and allow to cool.
Meanwhile in a saucepan add the flour and margarine and gently melt. Slowly add the soya milk and stir until thickened. Add the sugar and vanilla bean paste and stir until the sugar has melted. Take off the heat, pour into a piping bag and allow to cool.
In a bowl mix the icing sugar and soya milk tomake a thick but slightly runny icing. Take 2 Tbsp of this icing and add to another bowl. Add the pear and apple spread and mix to make a brown icing. So now you have a bowl containing white icing, and a bowl containing brown icing for the decoration on top of the Mille-Feuille. Take four of the pastry rectangles and gently cover the top side with the white icing. Then drizzle the brown icing in lines across the white icing. Using a cocktail stick, gently drag the brown icing to make the distinctive pattern in the photos.
Now it's time to assemble! Take one un-iced rectangle of the pastry and pipe the creme patisserie onto it in a continuous S shape, and dot with blueberries. Place another un-iced rectangle of pastry on top, then more creme patisserie and blueberries. Finally top with the iced rectangle of pastry.
Now you serve them, making sure you get one to reward you for all your hard work! X 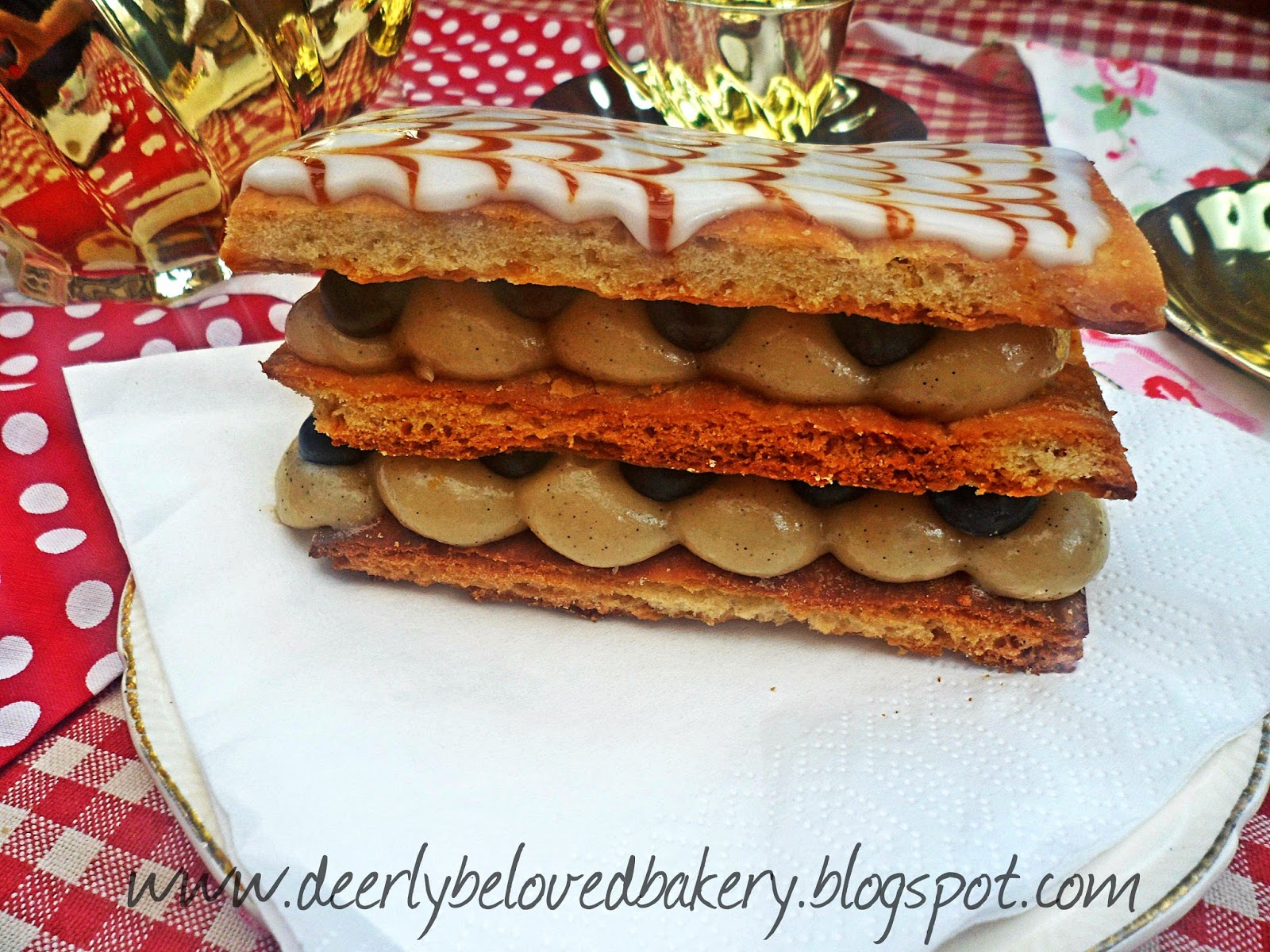 Posted by Deerly Beloved Bakery at 09:41